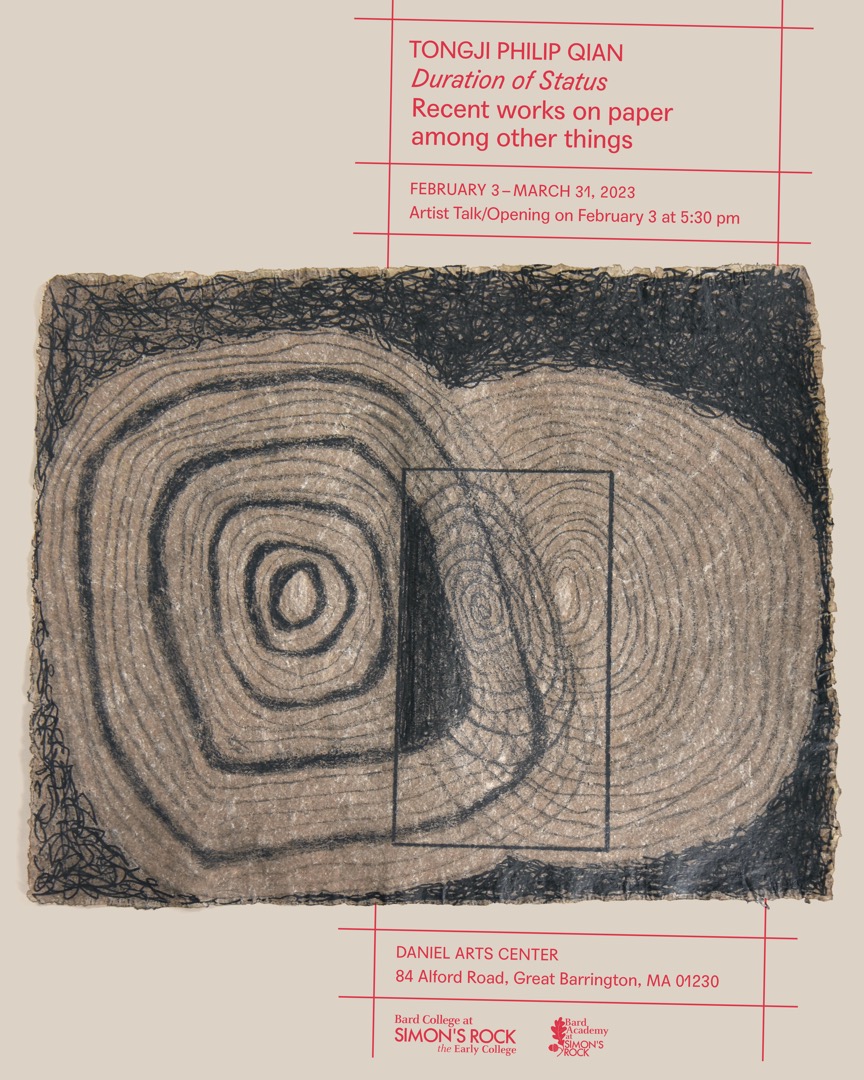 Tongji Philip Qian’s current exhibition at the Daniel Arts Center at Bard College at Simon’s Rock showcases primarily works on paper from the past two years such as graphite and pigment marker drawings, etchings, and woodblock prints. Other mediums in the presentation vary, but include leather structures and painted wooden panels. The artist describes this two-gallery project with the following statement:

“I am more interested in duration and efficiency rather than time and productivity. I think I know when to not create work, and I make sure I do not. Once a sense of urgency emerges, wherever it may come from, I know what to do.”

As a Chinese artist living and working in the United States, Tongji Philip Qian is intrigued by the juxtaposition between “America” and “elsewhere.” His works attempt to earn his membership in this country following movements commonly associated with Conceptualism and Post-Minimalism while anchoring a distance that recalls his identity as a foreign-born artist. In fact, he borrows the title of this exhibition, Duration of Status, from entry stamps issued by the United States Customs and Border Protection Officials. “Duration of status” is an immigration vocabulary, indicating that the person is legal as long as their paperworks remain accurate and unexpired. To Tongji Philip Qian, “duration of status” is a parameter he must follow to maintain lawful presence in the United States, but it also informs a useful framework to delimit his projects. For instance, he made some drawings in the show while timing himself in segments of 4 minutes and 33 seconds. Or, he invited his significant others, namely his partner Ada and furry companion Grappa, to dance on coated etching plates with a popular Chinese pop song called “Compendium of Materia Medica.” Or, he placed vegetable-tanned leather al fresco so the sun could darken specific areas. These parameters provided the artist with moments of confluence, paradox, and perhaps renewed relations with himself and the world at large.

Tongji Philip Qian was born in Shanghai, China. He received BAs in art history and mathematics from Carleton College, and an MFA from the Rhode Island School of Design. He chairs the Art Department at Bard Early College, Washington, D.C., and enjoys his frequent trips to the Hudson Valley.

Duration of Status is on view until March 31, 2023. For reproduction requests, interviews with the artist, and general inquiries, please contact TPQ Studio at +1-646-320-5932 or qiantjp@gmail.com.